In September of 2017, I traveled to Spain with my 21-year old son, to attend a family member’s wedding.  The night before the wedding, we were in an elevator on our way to dinner when I noticed there was an area of my peripheral vision which was missing from my left eye.  I became aware of this because, out of the corner of my left eye, I could not see the head of the person standing next to me in the elevator.     When we returned home from our trip, I made an appointment with my ophthalmologist to have my vision examined.  She conducted a visual field test to specifically check my peripheral vision.  It was discovered my vision was missing in both eyes, in the exact same place. My ophthalmologist announced she was quite certain I had 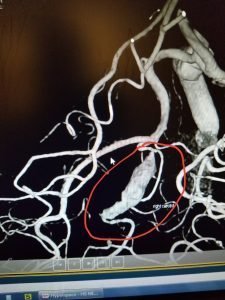 suffered a stroke and she ordered an immediate MRI. This was shocking news as I never experienced any of the symptoms of an aneurysm or stroke and I do not have any of the risk factors associated with strokes or brain aneurysms. I’m not overweight; I was a long distance runner; I did not smoke; I did not have high blood pressure; I did not have high cholesterol; and I was not aware of any family history for stroke or aneurysm.   I had an MRI, and then a CT scan and then an angiogram of my brain. Following the angiogram, I was admitted to neuro critical care ICU with the diagnosis of a dissected, fusiform aneurysm on my posterior cerebral artery (PCA).  This is a rare location for an aneurysm, with only 1% occurring in this area.  It was determined my aneurysm had probably bled a little and caused me to have a trans ischemic attack which is known as a TIA stroke.  This caused the vision loss I experienced.  Within days, I had a 7-hour, two-part operation.  The first part of the operation was to coil the aneurysm and the second part was to perform a craniotomy to bypass the aneurysm.  This was done to protect any further vision loss.  Because the aneurysm was dissected, the coiling procedure cut off the flow of blood through the affected artery.  The bypass conducted through the craniotomy, protected me from further vision loss. 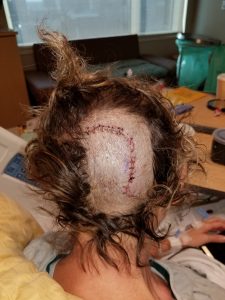 The discovery of my brain aneurysm came just two and a half weeks following the return home of my husband following five months of recovery from a heart transplant. In March of 2016, he went into sudden on-set, end-stage heart failure after a virus attacked his heart.  For two months prior to his diagnosis, he visited doctors trying to find out why he was so ill, and they all said he was suffering from an upper respiratory infection. He kept advocating for himself as he knew he had to have been misdiagnosed.  Finally, a nurse at the clinic where he works, ordered an CT scan.  He was diagnosed as being in severe heart failure and he was immediately taken by ambulance to a local heart hospital. Within days, he had a Left Ventricular Assist Device (LVAD) implanted, which provided a “bridge to transplant” for him. In June of 2017, he had a heart transplant which had many complications.  He returned home October 12, and on November 1, my brain aneurysm was discovered.

Strokes don’t always announce themselves with clear warning signs, therefore, one must be alert to changes in one’s body which might be a symptom of a larger problem.   Go to the doctor, and advocate for yourself.

My husband and I both survived and we appreciate opportunities to tell our story because neither one of us had risk factors for what happened to us.  It is because of self-advocacy, self-awareness, and research conducted by the Heart and Stroke Association, and the Brain Aneurysm Foundation, that my husband and I are alive today. My husband’s kidneys failed during the complications which resulted from his transplant, and he will now need a kidney transplant.  We remain confident a match will be found, and we can continue down our path of a “new normal”, which we are thankful for every day. 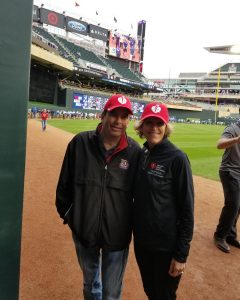 We call ourselves “The Tinman and The Scarecrow” and we speak and volunteer on behalf of the American Heart (and stroke) Association in Minnesota.  We were two of the survivor stories they featured as part of the Minneapolis Heart Walk in May 2017.  We speak about self-awareness, self-advocacy and research. In 2019, my husband and I were chosen by the American Heart Association to join the AHA for their lobby day in Washington, D.C.  This really lit a fire in me and when we returned home, I sought out information about the Brain Aneurysm Foundation advocacy day in Washington, D.C.  To participate in the lobby day, attendees must fundraise for BAF.  I was the highest fundraiser in Minnesota, which made me the Minnesota state ambassador for 2020.  Unfortunately, due to Co-vid, the event was rescheduled to September 2020, and then ultimately canceled for 2020.   Hopefully, there will be an event in 2021.

I had a lot of anxiety in my recovery. I thought so much about what might have happened had my aneurysm burst and what if I hadn’t gone to the eye doctor when I did and what if I hadn’t had such wonderful care along the way and what if, what if, what if…..  I have spoken openly about seeking help from a therapist and also taking anxiety medication.  I believe this is also helpful for many.  It’s unusual for a survivor not to have anxiety. I want other survivors to know it’s okay if you need help, physically, emotionally and mentally.  It’s a part of journey of survival. 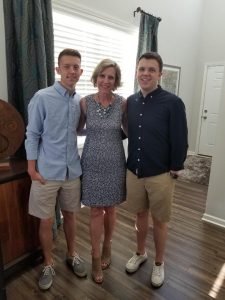