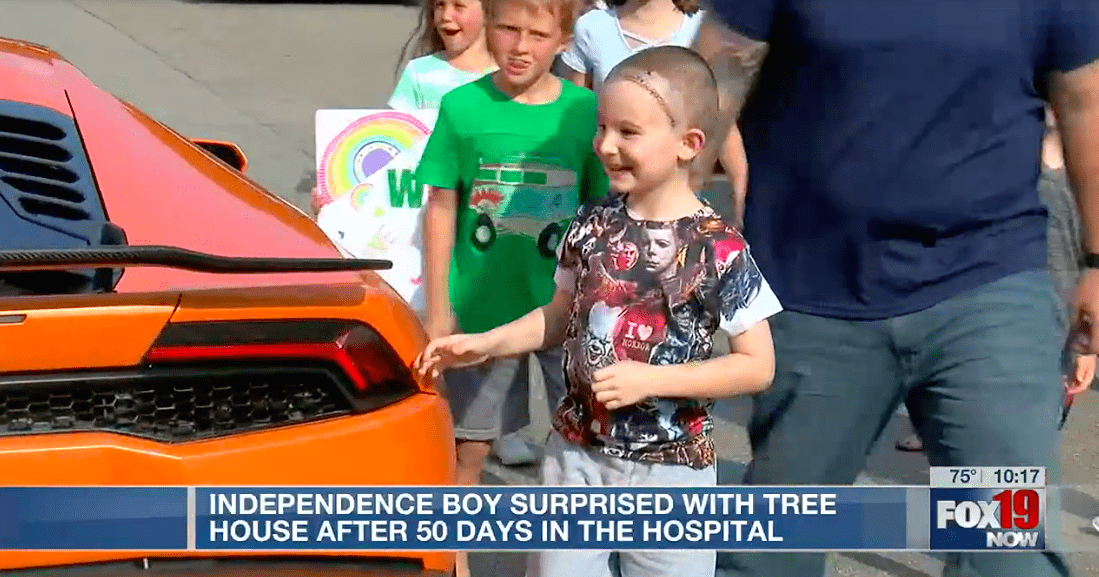 Kolton Powers had an aneurysm two months ago. His first trip home put him in tears.

By Courtney King and Brian Planalp

KENTON COUNTY, Ky. (WXIX) – A new treehouse in Independence might look like something from HGTV, but it’s actually built for a boy who survived a brain aneurysm.

On Wednesday, Kolton Powers, 7, came home from a 50-day stay at Cincinnati Children’s Hospital—and he did it in style.

Kolton’s dad, Brian Powers, picked him up in Kolton’s dream car: a Lamborgini.

Brian joked afterward, “Obviously being a police officer, that’s not going to happen.”

(The Lamborgini was rented.)

Then the pair had a police escort all the way back across the river, where Brian had another surprise in store.

It took several volunteers 15 days to build the treehouse, which features granite countertops, a 65-inch tv and an XBOX.

“The joy in his eyes was priceless,” Brian said. “He was so excited to see everybody, so excited to get home. He started crying, and that’s not Kolton.”

The 7-year-old suffered the brain aneurysm that put him in Children’s two months ago. Brian says he had four surgeries while hospitalized.

“I wouldn’t wish that on my worst enemy,” he said. “It was heartbreaking that you couldn’t help him or fix him, you know? All I wanted to do was take his pain away, and there was nothing I could do. It was gut-wrenching, heart-wrenching. It was just awful.”

But now, Kolton is back home again. And now, he gets to enjoy his awesome new treehouse.

“I just thought it would be something cool for him,” said Tyler Boehmker, who helped build the treehouse. “There’s a lot of amazing people that went into this.”

Brian asked Tyler and others to build the treehouse because Kolton, who has a black belt in Karate, is limited in what activities he can do during his recovery.

“I’m speechless. I am so blessed and honored to know these people. There’s just no words to describe it.”