The 4th annual Kenny R. Bryden, Jr.  Golf Tournament, a charity event on behalf of The Bee Foundation,  was a smashing success, drawing 82 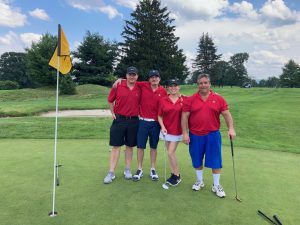 golfers to the 18 hole course at Pine Hills Country Club in Taylor, PA. Teeing off at 1:30, the golfers weren’t intimidated by ominous clouds and threats of bad weather – 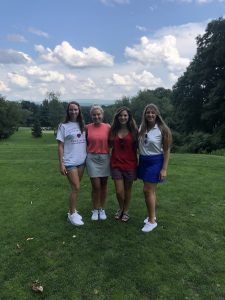 even going back to the course to finish up when a booming thunderstorm interrupted the events toward the end of the day. The outing, including a roving cart of beers and refreshments, auction items, and a delicious dinner, came off without a hitch thanks to the faultless organization by Debbie Bryden, her son Kenny and daughter Danielle, and a team of 9 energetic volunteers.

The golfers, drawn to the event to commemorate the passing of Ken Bryden from a brain aneurysm in 2017, we’re reminded of how extensive this condition is through inspirational cards in each golf cart and photographic posters of those lost.  Hole sponsorships included one in honor of Audrey Davidson. the 34-year-old daughter-in-law of one of the golfers, who left a devoted husband and four children after her death just months ago from a ruptured brain aneurysm. 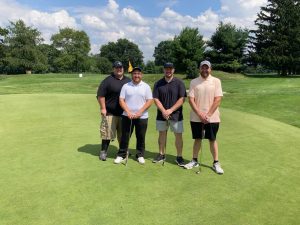 Presenting the check of $2371 to The Bee Foundation. Debbie said “Nothing can take the place of those we’ve lost. But being able to contribute to the work of this group and their efforts to prevent ruptures and expand awareness is more than gratifying.”