“I am so proud to work with my colleagues to reintroduce this critical legislation. Brain aneurysms are one of the most underfunded public health crises in our Nation. It causes a tremendous loss of life and dramatically diminishes quality of life for survivors,” said Clarke. “We drafted Ellie’s Law in consultation with members of the brain aneurysm medical and research communities to create the first ongoing dedicated research funding allocation to support medical advancements and innovation in preventing potentially fatal brain aneurysms and combatting long-term medical consequences and quality of life issues for brain aneurysm survivors. Addressing this critical issue by adequately funding brain aneurysm research is the right decision; it will save lives. I am proud to lead this legislation, and I look forward to it being signed into law.”

“Ellie’s Law represents a tremendous step in the long term, genuine commitment to new treatment discoveries for this devastating disease – a disease that often strikes patients in the prime of their lives. It demonstrates the importance of The Bee Foundation’s mission, to find new ways to prevent brain aneurysms from taking lives, inspired by the loss of Jennifer Sedney, who died on Christmas Day 2013 at the age of 27 and is named in Ellie’s Law.” – J Mocco, Chief Medical Officer of The Bee Foundation and Director of the Cerebrovascular Center at Mount Sinai Hospital System.

With an annual mortality rate of more than 500,000 deaths worldwide, brain aneurysms represent a significant public health crisis. Brain aneurysms are most prevalent in people ages 35-60 but can occur in children, and it is estimated half the victims of brain aneurysms are younger than 50. Approximately 30,000 Americans will experience a ruptured aneurysm each year, and fifty percent of ruptured aneurysms are fatal. Of those who survive, roughly sixty-six percent suffer permanent neurological deficits. Brain aneurysms are more likely to occur in women than in men (by a 3 to 2 ratio) and more likely to rupture in African-Americans (2.1 to 1 ratio) and Hispanics (1.67 to 1 ratio) than Caucasians. Despite the widespread prevalence of this condition and the high societal cost it imposes on the Nation, the federal government only spends approximately $0.83 per year on brain aneurysm research for each person afflicted with a brain aneurysm.

“More than 6 million Americans are living with a brain aneurysm—a disease that sits silently and often undetected until a rupture occurs and, according to the Brain Aneurysm Foundation, 40 percent of the time, kills instantly. And yet, despite the widespread prevalence of this condition, it continues to be significantly underfunded,” said Rep. Fitzpatrick. “Increased funding for brain aneurysm research is vital to finding and developing critical and effective treatments, interventions, and preventions. I am proud to join my colleagues in introducing Ellie’s Law, our bipartisan legislation that establishes adequate funding for life-saving research.”

“This legislation will help researchers find cures for one of the most underfunded, yet one of the most prevalent diseases in our nation,” said Representative Stivers. “Ellie’s Law is a huge investment in our research community. With this funding, they will be able to propel their medical advancements forward, to enhance, and ultimately, save lives. I am proud to support this bill, and will continue working on efforts like this to find solutions for the more than 6 million Americans affected by brain aneurysms.”

The full text can be found here.

Yvette D. Clarke has been in Congress since 2007. She represents New York’s Ninth Congressional District, which includes Central and South Brooklyn. Clarke is Chair of the Congressional Black Caucus Taskforce on Immigration, a Senior Member of the House Energy and Commerce Committee, and a Senior Member of the House Committee on Homeland Security. 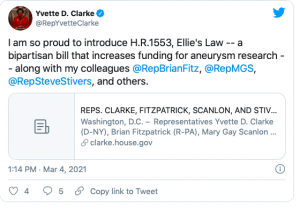 I am so proud to introduce H.R.1553, Ellie’s Law — a bipartisan bill that increases funding for aneurysm research — along with my colleagues @RepBrianFitz, @RepMGS, @RepSteveStivers, and others. https://t.co/TKstlYDJA4 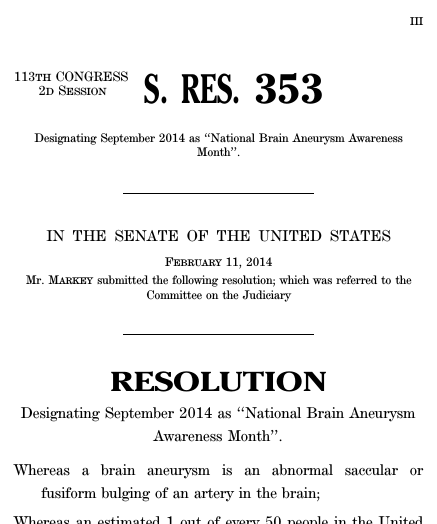