I had made the decision at the end of 2013 that I was going to kick of 2014 and start training for a Triathlon. I shared this goal with my husband and asked if we could join a different gym. I needed one with a pool so I could start to train. I thought, New Year … new goal. We signed-up and I started my triathlon training.

I was soon running 2 miles every other day. My plan was to start swimming by March 1st. But March 1st never came. At least it never came in the way I thought it would.

On the night of February 20th 2014, Chris and I went to the gym together. Normally, I would have gone on my own in the morning, but for whatever reason I couldn’t make that morning.

As we were running, I just didn’t feel like myself. I told Chris “I’m not feeling this run” and told him to continue on without me. In the next few minutes my life would change forever. I decided to lift some weights but still wasn’t feeling “right.” This was disappointing, because I had been making such progress and feeling great. I casually chalked it up to maybe not eating enough that day.

I put my stuff down on the bench and the next thing I knew I was tightly holding my head while experiencing a pain like I had never ever felt before. It felt like “thunder exploding” from lightning that has hit way too close.

I crashed to the floor. It was the last thing I remembered that day.

Chris would later describe the rest of that day to me. It’s still really hard for me to wrap my head around it. After a rush to the hospital, Chris recalls simply seeing a bunch of legs dangling below the colorless curtain in the emergency room. My blood pressure had sky rocketed causing a brain aneurysm to rupture … unleashing that thunder in my head … causing a stroke soon after.

The doctors prepared Chris for the worst and told him to have our family and friends come to the hospital.While they kept me alive by a machine, Chris had to walk my daughter Shay into my room … to say goodbye. Then a miracle happened. A teeny tiny movement with a wiggle of my toes unleashed a massive green light of hope … and reason for the doctors to perform surgery to coil the aneurysm.

My first memory is waking up following surgery in the ICU. The odd thing is that I came out of this surgery talking (those who know me know this was not shocking). The same on-call doctor from the night before was so confused when he saw me that he doubled checked to be sure he was with the brain patient who had just came out of surgery. My talking proved to be another dose of hope. Another miracle. Well, I’m not so sure Chris would still agree that my talking is a miracle!!

With a long 25 days in the hospital and an endless parade of visitors, Chris luckily kept a diary on who visited me. Some days, I would wake up with friends’ post-it notes all over me … appearing like a tickertape confetti of love notes! Once I began to grasp what the heck was going on I was scared to death: I what? What do you mean I had a stroke? A brain aneurysm?? My speech was ok and I had no paralysis. I had dodged a major bullet. Yet, I knew I had a long road ahead. Once I knew I could walk….I begged the nurses to get me out of the bed. After all, in my mind I still had a triathlon to train for!
The doctors basically said not sooo fast.

My last days in the hospital were spent deciding whether or not I was going to need a shunt in my head.

Back on February 20th, me leaving the hospital with a shunt was the very best case scenario. On March 13th, I was seeing this as a setback. I did not want to have another surgery. Unfortunately, with so much fluid on my brain, the docs decided I needed one.

With one last surgery … and one crazy hairdo … I get to finally go home. It was St. Patty’s Day! Now, I’m not Irish but I’ve always made this day about me because my name is Patty. It seemed ironic and totally fitting that this was the day that they were allowing me to “walk” out of the hospital… and I made sure I actually “walked out” of that hospital!! It was truly the luckiest Patty’s Day I had every known!

Unfortunately, my doctors wanted me to walk right out of the hospital and right into a rehab facility. I didn’t want to walk into anything but my own home. Chris really went to bat for me and told them that we already had a physical therapist … and that my girls were at home … and my dogs were at home and I had Val … the most incredible mother-in-law, who was already moving into our home to help take care of me.

As soon as I got home, I started physical therapy with my dear friend and therapist Jerry … I was still a little shaky walking. I couldn’t walk up or down stairs and I wasn’t allowed to drive. Val took me to all my doctor’s appointments. I truly feel Val and Jerry were my “angels” at this moment in time.
I had made amazing progress, but as my June Triathlon rolled around … I didn’t make that kind of progress obviously but I didn’t have to. 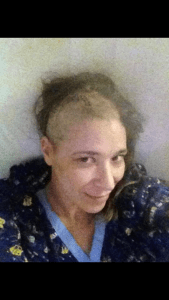 Chris, in a very short time, had trained for the triathlon I had planned to do … in my honor.
I was filled with tears and emotion waiting for him to cross the finish line. I was so proud of him!
As he crossed the finish-line he looks me right in the eyes … and then he whispers in my ear …
“Babe I love you, but I will never do another triathlon ever again!!”

One and done for him…he moved onto Spartan races after that! It would prove the only triathlon I would need him to do.
After months of physical therapy and rest and relaxation I begged to go back to work. Yes…crazy I know! I went back to work in July… two months earlier than my doctors anticipated. It was not easy but I wanted a piece of normalcy and whatever it meant I was going to find it. I wanted to shower…I wanted to be needed and I wanted to feel like me. Even though I knew deep down…I was not the same person… in so many ways I had become a better person. My first day back…I felt like a little kid on their first day of school!

I had no feeling in my hands. The doctors told me this was normal and that it would go away in a few months. I really didn’t want many people knowing this…I wanted them thinking I was capable. I found myself dialing with 1 finger to call people or actually walking over to their desk instead of sending them emails that would have taking me forever to type! By the way, not a bad idea for those in perfect health. J
At the end of July, I reached and accomplished what shocked many… I had run my first full mile! I had this!
I have recovered as well as I have because of where I was prior to my health crisis. I had made the choice of being healthy and taking care of myself when I started training for the tri. All of my doctors have said that I am where I am today because of the work I had done prior. But, I also know deep down it was because I HAD a few angels looking after me.

Six months later I decided that I WAS going to complete that tri I had originally started training for.
When I visited my Cardiologist to get his permission to train again for a triathlon…he nicely asked if I would consider yoga instead. He finally gave me his blessing and told me I was good to go!

I was the very last person to cross the finish line…some would see this as a failure. In reality…I had won this race!
I have since completed THREE triathlons, a Spartan Race and now I can add half and Full MARATHON to my list of accomplishments!
My husband Chris, my daughter Shay, and stepdaughter, Camryn, have been my motivation to get out of bed every single day. I can’t imagine not living this life without them. 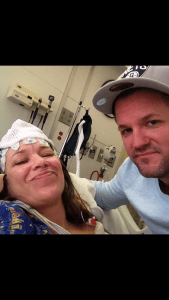 Early on, I joined a survivor group on Facebook. This proved so important to my recovery. I learned so much from reading peoples’ posts who were almost exactly like me. The survivor group carried me for many months as I learned so much from other people stories. I continue to participate, except this time to pay it forward by sharing my story to offer inspiration…especially to those experiencing their toughest days.
I hope I can inspire others who may feel a little “tired” to get up off the couch.

If I can offer any advice, it would be…please be patient with yourself. Make progress … don’t strive for perfection…. just keep moving!!!

Those who have had a stroke, an aneurysm…will understand when I say… I never feel like me…there is always a little haze. I compare it to the flu, but the flu on the day you start to feel good. This is how I feel all the time. Exercise has been the only thing that makes me feel like my “old” self. Exercise has gotten me through my darkest times. I am different from who I was … sometimes that’s still hard for me to accept. But my goal is to push through it and not let it defeat me. 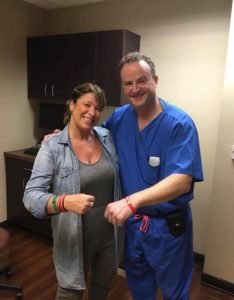 I fully embrace this journey … I continue to move and do what I love…
I am incredibly grateful I get to put one foot in front of the other every day. I hope to help those who are “down” to understand that your brain and your heart can get you through just about anything … I am proof of that.