“At age 35, Minda found out she had an arteriovenous malformation (AVM) on the left side of her brain that ruptured on February 17th, 2020. She suffered frontoparietal intraparenchymal hemorrhaging (a stroke) due to the ruptured AVM and aneurysm.

Her neurosurgeon successfully removed the AVM following a pre-op endovascular embolization in a left parietal resection surgery. Since losing her ability to walk and speak and undergoing a craniotomy, she’s received extensive physical and occupational therapy. After a total of three cerebral angiogram procedures, she has since been able to resume most of her normal physical activities. Minda has fully regained her abilities with slight deficits in balance and vision. She is primarily headache-free at two years post-op. 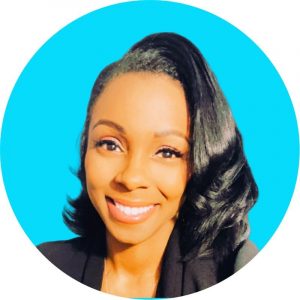 In sharing her story with the world via her book, “My Disentanglement: An AVM Survivor’s Story,” Minda seeks to raise awareness for AVM/aneurysm patients, survivors, and their families. As a wife and mother of three (including boy/girl twins), she is excited to share her faith in God and how this experience has motivated her to help others, even during her own recovery.

After receiving her associate’s from Southern New Hampshire University, she is pursuing her BS in Health Information Management.

Minda also increases awareness for AVM and stroke survivors through her advocacy to congressional members and her participation as an ambassador for The Bee Foundation.”