On September 29, 2016, my fiancé, Jerame, and I had gotten home from our Life Group, it was about 9pm. I was packing my bag for a weekend back home in Emporia and to do makeup for a bridal party. Jerame was in the other room and I went to talk to him about something and as I turned to walk to the other room it happened. Instant severe pain in my head, above my eyes and my neck became very stiff. I was nauseas and dizzy. I don’t normally get headaches so Jerame knew something wasn’t right because I was in tears from the pain. I tried to lay down and get comfortable, put ice on my neck and nothing helped. I took a few ibuprofen and laid in bed but the ibuprofen didn’t even touch the pain. I then became very cold and thought I was going to be sick. Two different times I got up to get sick but didn’t actually get sick. Jerame was looking stuff up on the internet about the symptoms I was having to see if he could find anything. The third time I got up to get sick I looked at him and said “I can’t get sick, I’ll rupture an aneurysm.” I didn’t really even know what that meant. I believe God spoke through me to tell Jerame what to look up. When I came back from the bathroom he had his shoes on and said we’re going to the ER. I didn’t argue.

It was around 11:15pm when we headed to the ER. I was lucky enough to still be conscience and able to walk inside. I told them I had the “worst headache of my life” and they got me checked in immediately. After getting me settled in a bed and the IV with pain meds going, they took me back for a CT scan. We were told the Dr. would be back in, in 45 minutes or so. He was there within 15. He told us that I had a subarachnoid hemorrhage, which I just looked at him confused and asked what that was. He then explained that I had a small bleed on my brain. He said he thought the Drs there could do it, needed to check some schedules first. I didn’t feel very confident about him using the word “think” when we are talking about surgery on my brain. I asked to be transferred to KU and they transferred me around 2am and got me settled into the Neuro ICU. I was pretty nervous, but yet I was also rather calm considering the situation. I wasn’t fully aware of the severity of a brain aneurysm and Jerame kept all that information to himself so that I wouldn’t worry. 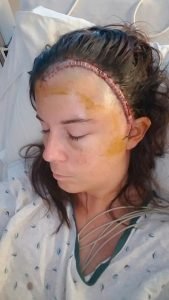 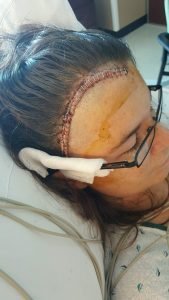 They let me rest until about 7am when the Neurosurgeon came in to let us know the game plan. He said they would start with an angiogram and go through the arteries in my legs to see how big the bleed was and possibly put a coil in to stop the bleeding. If they get that far and decide that it would be
better to clip the aneurysm they would take me across the hall, shave part of my head and open up my skull. (craniotomy) Around 8am they took me down for the angiogram. Around 11:30am they decided to take me across the hall and proceed with the craniotomy. They shaved a small part of my head, removed a 3 inch part of my skull and went through the natural pathway of my brain to get to the aneurysm. He thought at my age, it would be better to clip the aneurysm so I wouldn’t have to be put on blood thinners for the rest of my life. They put the skull back together with a titanium plate. I finally got out of surgery around 5pm. 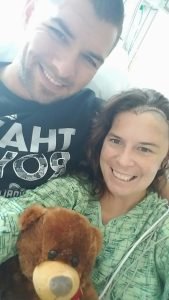 The next few days were long and kind of a blur. I slept quite a bit and just tried to keep the pain under control. They would get me up to walk around the floor and sit up in the chair, which started as quite the chore because I was a little off balance. I was in ICU until Oct 10, when I was released to go home. That first evening home I ended up having to go back to the ER, my lower back and legs became very stiff and cramped. We were worried and didn’t want to risk anything. They ended up giving me muscle relaxers and ordering PT. I went to PT twice a week for three weeks, mainly to regain muscle strength after being in a hospital bed for so many days. I went back to work November 21. The Dr told me that by December 1 I should be able to go back to doing my regular activities with no restrictions.

One of the many things I have learned after this, is that neurofatigue is a real thing. I may look normal, but I get tired and agitated more quickly than before and have to just take a break. My vision has changed some, the hearing in my right ear isn’t like it used to be and sometimes loud crowded areas overwhelm me. We don’t have any confirmation whether brain aneurysms run in our family or not and I had no signs leading up to this. Doctors said I could have had it for a long time. I encourage people to know their family medical history and if there is a history of brain aneurysm, get checked! Trust me, you’ll know the difference between a severe headache and this kind of headache. If you have a “thunderclap” headache, blurred/double vision, pain above or behind your eyes, weak/numb feeling or difficulty speaking, get to the ER and be sure to tell them it’s the “worst headache of your life.” That’s what saved my life, those words and getting to the ER quickly. I feel very blessed that we were in the right place at the right time and that God has more for me to do here. Live each day as though it’s your last. 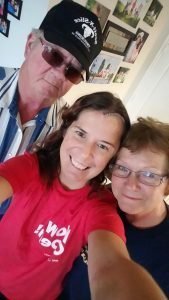