“Thank you to the Bee Foundation for supporting this important study on wide neck aneurysms!” – Justin Mascitelli, MD

Congratulations to Justin Mascitelli, MD, TBF’S 2017 Preventative Research Grant Award recipient for his two recent publications in the Journal of Neurosurgery which was made possible by The Bee Foundation.

Dr. Mascietlli was awarded a $25,000 grant to develop a multicenter, prospective registry of wide-neck intracranial aneurysms. The study, being the first of its kind, established a central repository for both unruptured and ruptured aneurysms treated by both microsurgical and endovascular techniques. Wide neck aneurysms have historically been harder to treat compared to narrow neck and this study enabled the equivalent evaluation of outcomes across centers, with the ultimate goal of determining the safest and most effective treatment for wide neck aneurysms. You can learn more about the project and Justin in our previous post here: Meet The Bee Foundation’s Brain Aneurysm Research Grant Award Recipient Justin Mascitelli – The Bee Foundation.

The study brought together the Neurological teams from the Barrow Neurological Institute, Mount Sinai Hospital and University of Texas Health and Science Center at San Antonio and established a registry of 310 patients between 2017 and 2020.  Included in the group were 223 unruptured aneurysms and 87 ruptured aneurysms, of which 2/3 were treated endovascularly and 1/3 through microsurgical clipping. The two papers were recently published in Journal of Neurosurgery for both the unruptured and ruptured cohorts. Most significantly it was found that for unruptured aneurysms there were fewer complications and superior clinical outcomes when treated Endovascularly.

We are so appreciative of the work of Dr. Mascitelli and his team for furthering the research related to wide neck aneurysms, especially in the area of preventing ruptures. To learn more you can read the Abstract for each of the studies here: 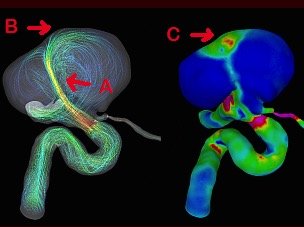