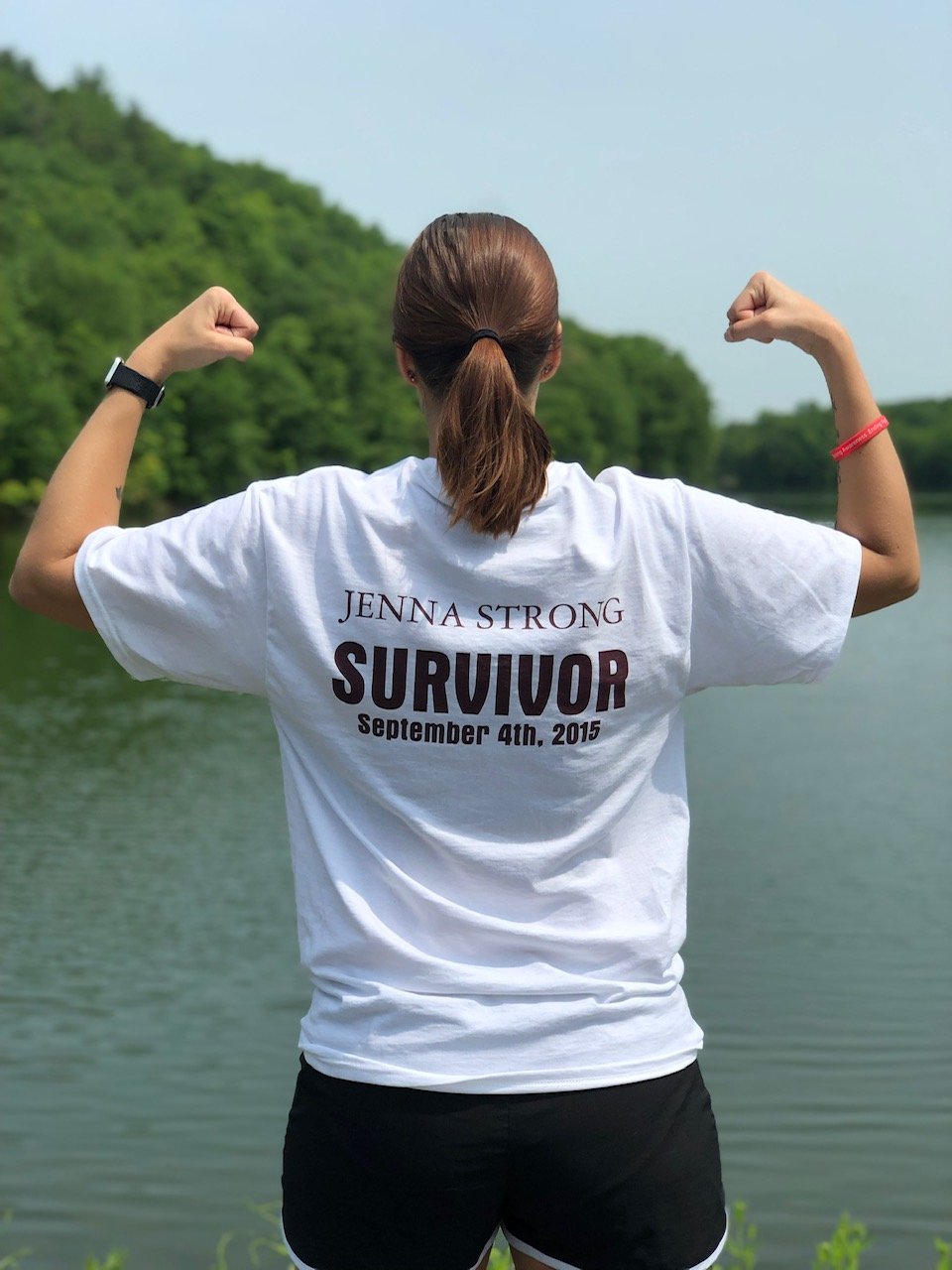 I want to share my story in hopes it will help spread awareness. Before this happened to me I really didn’t know anything about Brain Aneurysm’s and had never known anyone who had experienced one.

Leading up to my rupture I had experienced some of the worst headaches I’ve ever had. No matter how much Advil, Tylenol, etc. or how often I took it, it didn’t seem to go away. Everything seemed to bother it; lights, noise, any movement I made, it hurt so bad it would make me cry, which in turn also made it worse.

The first headache I had was right after I had spent the day at the beach with friends. I came home for a little bit to relax, then decided to go to the gym. I was doing an exercise with resistance bands when suddenly it was like my vision went black and when it came back I was super light headed and saw stars. I thought, wow maybe I’m just super dehydrated from spending the day at the beach. That wasn’t smart to go and work out. I went home to lay down and rest. This headache didn’t last too long. I think it went away the next morning. So, I continued on with my usual life. Went to work, hung out with friends, even went to Six Flags and rode on all the roller coasters. My next terrible headache came about a month later, again while I was at the gym. Now I was starting to get worried about working out, so I stopped. This time again I thought maybe I’m dehydrated and tired. My body is telling me to take a break. I’ve never had a migraine before so I just assumed this was what it felt like. From what I heard from people who have had them it sounded very similar. So again, I went on with my every day life. Except this time the headache didn’t go away right away. It lasted for a couple days. It was so uncomfortable that I didn’t even think I could make it through the day or even go to work (I worked as a manager in retail so it meant being able to deal with the public). But being my age and the symptoms I had, we figured it was just a migraine. Eventually this headache went away as well.
The next time it happened was when it ruptured.

Here’s where I would like to tell people how serious it is to get checked and that more people NEED to know about what exactly a brain Aneurysm is, and the signs and symptoms (even if you work in the Medical field!). I was out at a bar with my brother and some friends. We were spending the weekend down at the beach with our family. Luckily he had known about these headaches so I’m VERY fortunate he was with me. It was shortly after 11 pm. We were there for maybe a half an hour (I hadn’t even finished one drink yet), when I looked at him and told him I had another bad headache. Seconds later I had collapsed into him and he had caught me and lowered me down to the ground. I was unconscious for a few minutes. By the time I had come to, the ambulance was already there. When I woke up I was drenched in sweat and confused. My brother was trying to help me stand up and told me the ambulance was here for me. I instantly started crying and freaking out saying I’m fine I don’t need to go anywhere! While he kept telling me I need to go so I can get help! But, when I tried to stand up, the entire right side of my body was numb. I couldn’t feel my arm or my leg or even stand up. My brother and my friend had to carry me to the stretcher. Once I got on the stretcher I felt really nauseous. I told the EMTs I felt sick and asked if I could have something to throw up in. Unfortunately, these guys assumed I was just a drunk, young girl, out late at the bar. (They were waiting me out before transporting me.) They said “ok, throw up then” and watched as I vomited all over myself, in front of my brother and my friends. 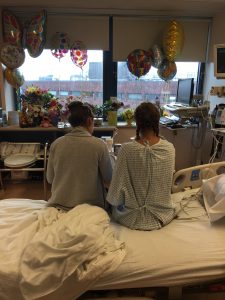 s point I was super upset and embarrassed. My brother knew something was wrong and was becoming upset himself that they weren’t helping me. Finally, a paramedic showed up to the scene and he told her everything. Thank God for her, because she understood the severity. She yelled at the EMTs to help her get me in the ambulance as we needed to get to the hospital ASAP! -Just because you’re at a bar and need an ambulance doesn’t mean you’re drunk! UGH!-

Once we arrived at the hospital, I had to get some scans done and wait for results. Since this hospital was a smaller one, someone in India was reading my results! They didn’t come through as quickly as we would have liked, so while we were waiting my parents showed up to the hospital and before being told what was going on they were asked what major hospital I would like to be transported to.. “Yale!” Yale was 45 minutes away (with no traffic) and Lifestar wasn’t available so we took the risk of going lights and sirens the whole way, because it was the middle of the night at this point, and no road construction was going on due to it being Labor Day weekend. By now, I had taken some meds and was exhausted. The ride felt like both the quickest and longest ride of my life. I still had no idea what was going on. From there it starts to get fuzzy. I left the bar around midnight or so and was in surgery around 6 am. My whole family was anxiously awaiting my results. My doctor had told them I had a ruptured brain aneurysm and another aneurysm right on top of it, kind of like a snowman. He asked them to please not look anything up, knowing that the survival rates are so low, time is of the essence for something this serious, and it was a risky surgery. Dr. Matouk was my surgeon. He is amazing! He told everyone that he was going to go in through my groin and attempt to coil it. Should it be unsuccessful, I would have to have a craniotomy. It was successful! To speed things up from here, I spent about 2 weeks in the hospital. I was told I would be in there at least 6 months, before going to a rehab facility. It felt like I was there for longer. I was exhausted. You don’t sleep much because well you’re uncomfortable and in pain, and also you get woken up every hour to be checked on. It got to the point when I heard one of my nurses voices I was instantly ready with my arms up to have her do a neuro check. My birthday is September 25, and I was determined to be out of there before that. No one wants to spend their birthday in a hospital! My amazing Mother was by my side from the moment I opened my eyes, until the second I fell asleep at night. We live over an hour away from the hospital so she had to stay nearby in a hotel, while my Dad was home with my siblings and had to work. They still came to visit so much and sent pictures of all our animals (we live on a little farm) to make sure to cheer me up! When I woke up after my surgery, my recovery room was bursting with flowers, balloons, cards, stuffed animals, you name it. I couldn’t believe the support I had from all my friends and family. I am truly so blessed to have them all in my life! 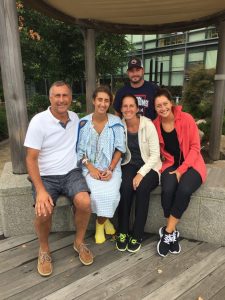 It has now been almost 5 years since my rupture and I’m happy to say I have made a full recovery! No deficits, and my only restriction was no binge drinking, which was totally fine by me! I had a couple set backs throughout this. Exactly a month later I ended up having a seizure. I was out to eat with some friends and my sister, when I suddenly lost my peripheral vision, had tingly ness in my right arm and couldn’t get my words out. This lasted maybe 5 minutes but ended up going back to normal. It sure did scare me. We hurried home and ended up going back to Yale. Oddly enough, I wound up back in the same hospital room (#11 – my brothers favorite/lucky number), to spend the night and have some tests done. Nothing too serious to worry about as this is a normal side effect to experience after having an aneurysm. I went home the next day. Then a couple years later they saw something on my MRA scan and I had to go back in for an angiogram to make sure another aneurysm wasn’t growing. Good news- there wasn’t! I was able to go home and told not to worry. I went from having to have 6 month check ups and MRAs to now being able to wait 2 years in between! A HUGE shout out to Dr. Matouk for being the most amazing Doctor and the wonderful nurses on the NICU at Yale New Haven Hospital. Truly I wouldn’t be here today if it wasn’t for all them, and the love and support from my family and my friends. Thank you! 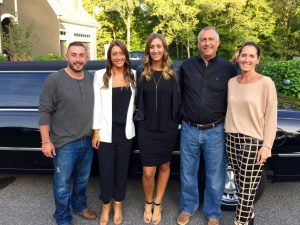