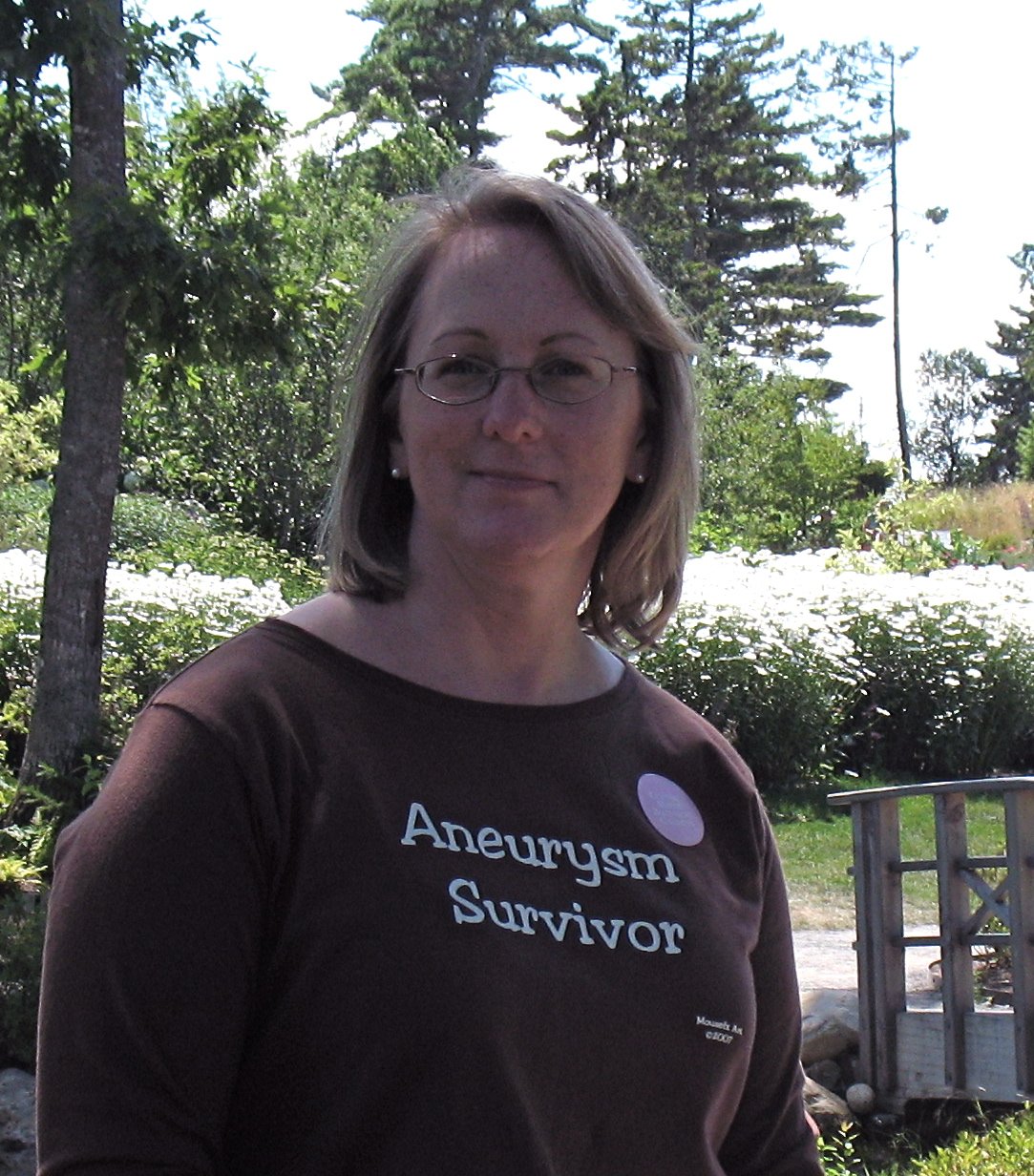 I am a two-time brain aneurysm survivor. I had a rupture in 2006 and that was coiled and then in 2011 a 2nd one was discovered and that was clipped (un-ruptured) in January, 2014. During that time period I also lost my sister to a ruptured brain aneurysm and my husband’s niece died of a rupture. Unfortunately, my family has been doubly touched by this silent killer.

Writing this blog has not only been therapeutic for me over the years, but I have been told it has helped a few people since I started it in 2006. I’m now on my 2nd hosting structure of this blog and have had to redo a lot of posts as a result, so if there is some funky spacing and bad links, you’ll have to forgive me…I’m trying to fix them when I have the time.

Since my rupture in 2006 my family has devoted a great deal of time, money, tears, and efforts in educating the general public about brain aneurysm awareness. As a result, we have met other wonderful survivors, not only here in Maine, but throughout New England and the country. We have also reached out to those who have lost loved ones and helping them understand what is all-too-often misdiagnosed and misunderstood. Our goal is to save lives.

If you are reading this because you are a survivor, have lost a loved one, or have recently been diagnosed with a brain aneurysm, I hope you find this blog comforting, informative, educational, honest, and humorous…even if I get terribly sarcastic at times.

THE DAY IT HAPPENED

The morning of October 5th began at 4:00 a.m. I was NOT happy that the kitty cats were up at this hour playing. I got up, visited the bathroom and climbed back in to bed. This is where the day changed dramatically.

I had a horrible pain in my head and the base of my skull in the upper part of my neck. Something like I had never experienced. I could not get comfortable. I was short of breath. I tried sitting up, I tried standing, but was brought to my knees due to be unbalanced…nothing helped. I knew something was wrong, but didn’t know what is was. I awoke Dave simply saying “Something is wrong with me.”. He called 911.

As Dave was on the phone describing my symptoms, both hands went completely numb. I thought for sure I was having a heart attack. I have never experienced anything like this. Very scary. He hung up from 911 and we waited……and waited. 20 minutes later the EMTs arrived.

By that time, I had calmed down, the pain wasn’t as severe and once they took my vital signs, the distress wasn’t nearly as much as it was before. I didn’t know what was happening, but still knew something wasn’t right. The EMTs left it up to us if they wanted them to transport us to the ER to be looked at, or if they wanted to call ahead and let us drive over. We decided on the later, but even that was a question. One of the EMTs said that if I felt is was something so unusual that I SHOULD get it checked out. Thank God we did.

Dave and I drove to the Augusta Medical Center emergency room. No one else was there, so at least I wouldn’t have to wait, but I wasn’t feeling good that’s for sure. Very weak, headache and neck ache. We got right in to see a Dr. and thankfully, he had an inclination on what I might be. He ordered a CT scan.

I was given something to calm me down..not sure what. I just know when the Dr. came back into the room with the results of the scan, I was numb….literally. I assumed because of the way my heart races, my arms when numb and other things, that it was all heart related. I was completely unprepared for the Dr. to say I had had a ruptured brain artery or aneurysm! I knew this was NOT good and could be deadly. I was still numb, not really able to completely take I what I was being old.

Portland Maine Medical Center and within 15 minutes it was there and ready to go. It was all a whirlwind at that point. All happened so quickly, and thankfully so. Dave didn’t ride down in the ambulance with me, but wanted to stay back and speak with the Dr. a moment while I was transported. It was the quickest trip to Portland I’ve never made in my life. Close to 30 minutes. It’s normally an hour or so away. Dave followed behind and must have
been driving very close to the ambulance speed because he was right there after I arrived at the hospital.

I was still pretty out of it. I don’t recall a lot of my arrival at Portland Maine Med. I knew I was in SCU3 or special care unit 3 (ICU). I recall having more scans to fully determine the extent of the damage. They reconfirmed it was a ruptured aneurysm, but luckily, one that hadn’t bled too much. It would still require surgery and quickly. The best guy to do it there at Maine Med was Dr. Eddie Kwan. He was expected to be on vacation. If they could get him, I could have it done right there…if not, I may have to go to Boston. Ugh!

Thankfully, Dr. Kwan either cut short his vacation, or hadn’t left town yet, and was able to perform surgery the next morning.

During this time Dave called Dori and she immediately made arrangements to fly out to be with Dave. I’m so thankful she was able to do that. Not only did I need to see a familiar face from back in NY there, but Dave really needed someone there as well. I wasn’t “experiencing” much at that point, other than pain and discomfort, but Dave and Dori and the rest of my family must have been so frightened. Dori flew in Thursday afternoon.

Heidi is an inspiration to us all!  You can read more of Heidi’s blog here.  http://www.brainblog.teatimewithheidi.me/

The mission of The Bee Foundation is to raise awareness of brain aneurysms, such as Sharon’s, and increase funding for innovative research that changes lives. (Fundraise Here).  We are building a robust and dynamic brain aneurysm research community with our Scientific Advisory Board, donors and network of researchers interested in grant funding to support meaningful research. Our community, anchored by our grant recipients, survivors, and their loved ones, is committed to advancing brain aneurysm research.