I remember very little of the early days following my aneurysm rupture on December 29, 2021, a fact I find somewhat distressing. There are weeks of my life I remember only as moments. I don’t recall events of great importance, such as being informed of what happened to my brain, or realizing my left side was paralyzed. This makes writing about the experience difficult. In my own essays and poetry I try to capture my experience through the metaphors that feel accurate: such as haunting/ghosts. But setting out to write something more literal does stump me a bit.


I do remember the rupture/hemorrhagic stroke itself, which happened on my 24th birthday. Strangely but gratefully I recall no headache. I was recovering from Covid, still congested, and had just boiled some water to fill my neti pot. I carried the kettle into the bathroom, set it down in the sink, starting to feel odd. I suddenly fell to the floor, losing my balance and/or suddenly becoming paralyzed. I don’t remember what other symptoms I had, if any. I managed to drag myself into the kitchen where my roommate found me.She had taken the day off work to celebrate my birthday with me. I remember her trying to help me up and saying “I’m not sure what’s happening, I’m really freaked out” and responding that I didn’t know either and had collapsed and just couldn’t get back up.

I learned later that my roommate called an ambulance and when the paramedics came I was seizing. I remember nothing else from the day, but according to my roommate the EMTs quickly knew I was having a stroke from my hemiplegia and slurred speech. I was first taken to the closest hospital, Elmhurst, which medically stabilized me and did scans then sent me to Mt. Sinai for treatment. At Sinai I had a hemicraniectomy to reduce the pressure on my brain and had the ruptured aneurysm embolized with onyx. 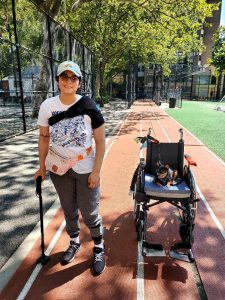 I would end up spending about two weeks at Sinai of which I remember very little .I’ve been back for several more medical procedures and the neuroICU nurses often say they remember me but I never remember them. I have a few fragmentary memories: talking on the phone to a friend while eating jello and responding ‘normal, Jello’ when she asked how the jello was, having the staples on my head incisions removed, being annoyed about needing to use a bedpan,etc. But, no memory of anyone explaining what had happened to me or of becoming aware of my paralysis.

My first clear memory is the ambulance ride from the hospital to rehab at NYU Rusk. I remember that I understood where I was being taken. Logically by that point I must have understood my hemiplegia because I was unbothered by being transferred to a cot and riding in the van in that. The EMTs riding with my mother and I were very nice. We chatted with one of them who, like me, was from Brooklyn. This EMT had long orange and pink fingernails which my mom complimented. I remember asking my mother how what had happened to me was different from a stroke and remember her explaining that it was a type of stroke. This is the first memory I have that acknowledges my aneurysm. It seems like evidence that someone had explained what had happened to me already at some point.

My memories of rehab feel vague in a much more normal way, like my memories of my sophomore year of college for instance. I have a sense of my schedule (dry eggs and potatoes for breakfast, speech early in the morning, then OT, usually a veggie burger and oatmeal cookie for lunch, PT and rec therapies in the afternoon, visitors and dinner in the evenings, watching TV when they finally fixed it) and some specific memories ( taking some early steps hooked up to a giant mechanical walker, doing vision tests in OT and missing a lot of stars on the left, a friend bringing soup and perogies from my favorite Jewish deli, sessions with my beloved music therapist singing silly songs and playing kazoo). I felt clearer and happier there in rehab than in the hospital, I was busier and had a fixed schedule, I had more socialization with my roommates, therapists, and visitors, I felt safe with my nurses, PCAs, therapists and physiatrist. I often felt frustrated but it was hard to get too discouraged when I was making so much obvious progress like relearning to walk. I read a lot of poetry in rehab, particularly  Arseny Tarkovsky. My memories of rehab are mostly positive. 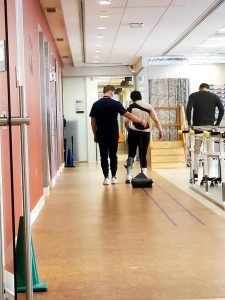 During my time in rehab I left for two weeks for my cranioplasty. I remember talking to my doctors and nurses during that hospital stay, being shocked that my head wasn’t bandaged up, and returning to rehab surprised but happy to be given my old room. I was discharged from rehab in the middle of March. I was offered an extra few weeks there but refused them, wanting to get on with my life and happy with my progress if sad I hadn’t made more with my affected arm.

The next phase of my recovery was receiving home therapy in spring 2022. I had surprisingly excellent home therapists through VNS and made a lot of progress with my affected leg. Less so with my arm as per usual. But tragedy struck again. My follow-up angiogram in March found another aneurysm on the AVM, unruptured. I had known that I would have to decide how to treat the AVM at some point and couldn’t just live indefinitely with something in my head that would rupture and kill me, but finding the new aneurysm meant the decision would have to be made quickly. Two courses of action presented themselves: deal with the aneurysm in the next month and keep thinking about how to address the AVM, or have open brain surgery to resect the AVM ASAP. I ended up taking the first option due to a surprise stroke of luck. The French doctor who had invented a minimally invasive way to treat AVMs, the transvenous embolization, happened to be visiting Mt. Sinai for one day only in May.  My neurosurgeons were in contact with him and he agreed to take on my case. So I had the new aneurysm embolized in April, then in May had my AVM treated with this method that is considered radical in the U.S. but already standard in Europe.

Having my AVM treated has improved my quality of life immeasurably. The relief I experienced after the procedure made me realize that I had spent the months from January to May living under the fear of death. Which I guess we all always are but rarely with such good reason. When I explained the feeling to a friend they said it sounded like I had been standing under a cartoon piano all winter and spring and now the piano is safely in the high-rise apartment. I would say that that’s pretty accurate. My emotions about the AVM now are relief and gratitude. I recognize how incredibly privileged I am to have been treated at a renowned teaching hospital, one of the world’s best, where I could have my AVM treated before the new aneurysm ruptured without the risk, trauma, and recovery time of a second open brain surgery. 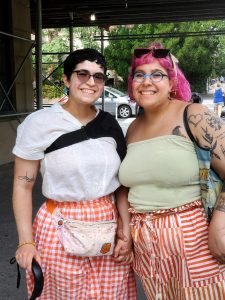 I’m still very much in the process of recovery. I am continuing my outpatient therapy, though I have been discharged from occupational therapy though I still lack the use of my left arm. I continue to make progress especially cognitively, and can now walk a mile, even if it takes an hour. Much of the work of recovering from what happened to me is internal and cannot be measured. I’m grateful to have had access to neuropsychology since my time in rehab.

The aspect of recovery I’m dealing with now and have had the least support for is the personal identity crisis of having almost died and acquired a disability on my 24th birthday. A brain aneurysm rupture is an event that abruptly divides one’s life into before and after. One of the greatest emotional challenges of my recovery has been not feeling like myself/the person I was before. I sometimes feel that I’ve lost the qualities that made me myself before my stroke like my wit, craftiness, curiosity and warmth. My rehab neuropsychologist suggested I keep a list of moments when I do feel like myself. Doing so and having such a list to look back on has helped me remember that I am the person I was before even if my body and mind don’t work exactly the same as they did before.

I haven’t yet returned to work. My work as a librarian/archivist requires two functional hands. I have reframed my ultimate recovery goal from returning to my pre-stroke life to trying to live a joyful, meaningful life whatever my health/ability. Trying not to feel like having a good life is dependent on making a ‘full recovery.’ But I’m continuing to work hard in therapy and staying involved in political  organizing, writing a lot, seeing friends, walking every day. It’s impossible to know what the future holds for me in terms of my recovery or anything else. But I’m trying to live in a way that is healthy, creative, and sustainable.