Its the New Year and I am thinking about how life changing 2022 was for me and all I am thankful for. I first found out about my brain aneurysm in 2017. I was on vacation in Japan when a migraine hit right before I was supposed to get on a plane back to California. If I were at home, I would have taken a Tylenol and slept it off. But since I was in no shape to make it to the airport, I ended up in the emergency room. It was there that they did a MRI and told me the news that I had a brain aneurysm behind my right eye . To say that I was scared is an understatement . My mother passed away from a brain tumor and since then, anything relating to issues with the brain has sent me on a freak out spiral. My stay in Japan was extended but I was soon cleared to go home. It turns out the migraine was unrelated to the aneurysm. It was found by accident or according to medical professionals “ incidentally “. I am so thankful that the medical team in Japan took the time to do a brain scan . I had complained about migraines to my doctors in Los Angeles and they did blood work but nothing more. Their conclusions were stress and a lack of vitamins. Because I found out about my condition, I was able to be monitored. I gave birth to two healthy daughters in 2019 and 2021 and had elective C- Sections for both to reduce the risk of pressure while in labor.

I was getting brain scans about every year to monitor my condition. They would consistently show, according to the radiologist’s notes “ no significant change in size.”  Then a few months before I was scheduled to give birth to my second daughter, my neurosurgeon expressed concern that my aneurysm was changing shape and had grown. When they found it back in 2017 it was about 1mm and now it was closer to 4mm. That news hit me pretty hard because I had come to think my aneurysm would just remain small and stable and that I would be one of the many people out there who lives with one with no incident. That is because I had heard many people live with brain aneurysms and don’t know they do. This is true, but the sad fact is that because most people don’t know they have this, the aneurysm burst is often fatal . When my neurosurgeon said he thought a angiogram to better look at the aneurysm was needed, I was not ready to hear it. I was about to give birth in the next 2 months and I emotionally had trouble processing this. Thankfully my Dr. said I could wait until after the baby was born to make my decision about the angiogram. My daughter was born in December of 2021 and in the summer of 2022, I began seeking second options because I was afraid that even a angiogram had risks such as stroke. I got 2 more opinions and ended up going back to my original neurosurgeon. The funny thing is that my daughter’s pediatrician helped me make that decision. I was freaking out about where and who would do my surgery because of the acute skills and specificity required to successfully treat this condition in my brain. Done wrong and I could die. When I took my daughter for her infant check up and told her Dr about what I was going through, he took the time to share his personal stories of treating children who had burst aneurysms. He said this was not something I should wait on and that I needed to get it treated asap. I told him the 3 different neurosurgeons and hospitals I was considering and he looked them up then and there. After looking into each doctor, his recommendation was my original neurosurgeon, Dr Geoffrey Colby at UCLA. Although he was younger and had less years of experience then the other neurosurgeons, he was more specialized in treating brain aneurysms and was recruited from John Hopkins in NYC which is often considered the #1 neurological hospital in the United States . I soon scheduled my surgery .
I had a flow diverter stent placed in the blood vessel in my brain to divert the blood away from my aneurysm . Over time it should shrink because it’s not getting the blood flow. 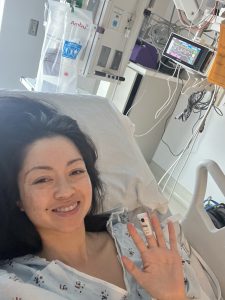 My biggest problems were a hematoma at the groin incision site because of the blood thinners I was on , Brilinta and Tylenol . I had to stay in the ICU a extra day to make sure the hematoma was not going to cause further issues . Once I returned home , I made sure to get lots of rest and had relatives take care of my young daughters . In about two weeks I started to feel like myself again .
I am scheduled for a follow up angiogram in April to check on how well the stent is working . These days I feel good and you would never know that less than 3 months ago I had brain surgery . I am beyond thankful that I was able to know about my condition and treat it . I am able to be here for my 2 young daughters and God isn’t done with me yet.

I want to encourage anyone who has migraines or a history of brain aneurysms or brain health conditions of any kind to get a brain scan . When my daughters are old enough, I will have them checked out. I hope that the health care system in the United States gets better so that more people have access to better health care and are encouraged to get to the root cause of issues instead of just treating symptoms. I am thankful that I found The Bee Foundation and think their work to promote awareness is life changing . I have to remind myself to slow down sometimes and remember that I am very lucky to be here.