Carlos Azuero: Running a Marathon for His Aunt 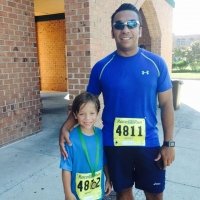 Written by Katie Deinert  Posted on The Bee Foundation
Share

The Bee Foundation recently had the pleasure of speaking with our biggest fundraiser for the Philadelphia Marathon Bee Team, Carlos Azuero. Carlos’s generosity with his time and training efforts have raised $1,055 so far. Here are some insights into his preparation to run and his inspiration through personal experience with brain aneurysms.

Bee: How did you find The Bee Foundation?

Carlos: I found it online. I was looking through on the marathon website and I wanted to use a charity to support a good cause. When I saw what The Bee Foundation was about I had no doubt that this is what I want to do. So it was just from the marathon website.

B: Have you done a marathon before or is this your first one?

B: Well that’s exciting. How was your training for this, pretty consistent? Are you hoping for a good race or are you just looking to finish?

C: I’m just looking to finish, but I do have a time that I want to meet. I’m very busy with work and I haven’t had time to commit to a set training schedule. So I’m pretty much running as much as I can in the middle of the week because my job is very demanding. But in the middle of the week I can get maybe five miles, three times a week, and then I go longer on the weekends – I do as many miles as I can. I’ve been consistent on the weekends, I’ve been pushing my mileage like 10% higher per week. I’ve hit my maximum amount twice; I went 20 miles each in the past two weekends. Now I’m just tapering back because they don’t recommend to run more than 20 or you risk injury. Very exciting and tough but it’s a mix of mental and physical challenge that I’m up for. I like it.

B: Big races like this are so mental, it’s very tough.

C: Just one step at a time.

B: So you said you wanted to do this for charity – any particular reason you didn’t sign up as an individual, you sought out to race for a charity specifically?

C: I saw many people in the past and that’s what they do, a marathon as a way to support a cause. I want to do the same; you know running a marathon is not easy, it’s not like you’re out there running a 5K or a 10K. You’re pushing your body to the limits to see how far you can go. So I thought if I’m going to do this, I’m going to help somebody else while doing it. That’s what made me think if they have these charities here, why not sign up for that? Maybe get some support from people that know me who know what I’m going through to complete this. If they know I’m doing this for a good cause they’ll donate as well to support me.

B: What is your general knowledge of brain aneurysms and your background with them, and have you fundraised for brain aneurysm research before?

C: This will be the first time I do a fundraiser for brain aneurysm research. The only time I’ve been exposed is when my Aunt passed away, 13 years ago, in 2002. I didn’t know much about it actually, and she was very young, maybe late 40s. She just had headaches. It was like a weeklong headache that wouldn’t go away. And she was staying in our house at the time. One night she was just tired, she laid down to sleep and she was tired because of the headache. And suddenly, as soon as she laid down, she started having a seizure. So it was very scary, of course, because we could see her body trembling and jumping up and down and there’s absolutely nothing you can do to stop it. We had to call an ambulance and the ambulance came and took her, rushed her to the hospital. And that’s how we found out that the cause of the headaches was that she had a brain aneurysm. But it had already ruptured, it was already too late. She was able to come back from the hospital. She went back home and she was fine but a few days later she got worse and she didn’t make it. That’s how I got involved. She was a very important person in my life. She was very spiritual, she was always calm, and she had many kids and she was always so willing to help anybody. She wouldn’t judge and she was a very amazing person.

B: It seems like you got that from her, because you’re doing a really big thing right now to help other people.

C: Yeah, and she’s my inspiration. When I want to stop at mile 20 I’m going to ask her for help.

B: I think right now I saw you’re the largest fundraiser for The Bee Foundation for the marathon. How have you raised funds for this?

C: Actually just online and social media. I shared it on FaceBook, I used my email at work also. The gym I go to, with friends. And people have been more supportive than I thought they would be.

And as an example of his inspiring humility, Carlos ended the conversation by saying that he wanted to thank us for giving him the opportunity and he hopes he doesn’t disappoint; he just hopes everyone is still there by the time he finishes! Of course The Bee Foundation appreciates his monumental effort to raise money for brain aneurysm research and awareness, and we wish him the best of luck in the marathon; we would never be disappointed!

Want to get in contact with us? Email us:  [email protected]