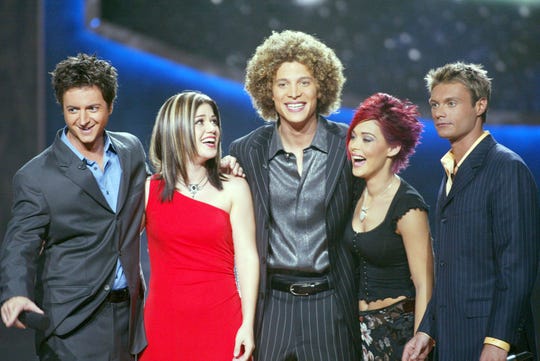 Nikki McKibbin, who finished in third place behind Kelly Clarkson and Justin Guarini on the first season of “American Idol,” has died, according to a Facebook post from her husband. She was 42.

Craig Sadler shared Saturday on social media that McKibbin “suffered an aneurysm on Wednesday” and had been kept on life support before an operation early Sunday morning to give “her final gift” as an organ donor.

“Even at the end she is still giving,” he wrote. “She was so loved that I know thousands of you will be grieving with us.”

McKibbin was just 23 when she auditioned for the first season of the reality singing competition, where she rocked songs like Bonnie Tyler’s “Total Eclipse of the Heart,” Janis Joplin’s “Piece of My Heart” and her idol Stevie Nicks’ “Edge of Seventeen.”

“Nikki McKibbin was an incredible talent and we are deeply saddened by the news of her passing,” reads statement from the show provided to USA TODAY by spokesperson Emma Harvey. “She was part of our American Idol family and will be truly missed. Our hearts and prayers go out to her family and friends during this difficult time.”

After “Idol,” RCA Records signed McKibbin but wanted the rocker and Texas native to pivot to country music. She walked away and later joined Dallas metal band Rivethead. In 2007, she released her first solo album, “Unleashed.”

“A lot of people look at me and still tell me it was a stupid decision,” McKibbin told USA TODAY in 2008. “I would’ve felt like I was selling out. … I’d rather be broke and happy than rich and miserable.”

She went on to make several reality TV show appearances, including on “Fear Factor,” “Battle of the Network Reality Stars,” “Celebrity Rehab With Dr. Drew” and “Camp Reality,” according to her IMDb page. On “Battle of the Network Reality Stars,” McKibbin clashed with reality star and now former White House aide Omarosa Manigault Newman – at one point, she even threw a punch at Newman off-camera.

In 2014, she returned to the world of “Idol” when her son, now in his early 20s, auditioned, making them the first mother-son pair of contestants in the show’s history. Tristen Langley was sent home in the post-audition round.

“American Idol” hopeful Tristen Langley and his mother, former finalist McKibbin, at his audition in 2014. Langley was sent home in the post-audition round. (Photo: MICHAEL BECKER/FOX)

McKibbin’s fellow competitor Guarini called her a “fiery, funny lady who could sing the Hell out of a rock song” in a lengthy Instagram tribute Saturday, recalling the young singer’s “infectious” joy when she received flowers and a card from Nicks, “her idol.”

⁣”Even in our 20’s when we were on American Idol together I could tell that she’d had a challenging life, and that not that many people had been kind to her along the way,” he wrote. “After the kind of emotional beating she took at the hands of the masses, she deserved to feel good about herself, even for a little while.”

Justin Guarini, Nikki McKibbin and Kelly Clarkson hug after McKibbin was voted off the show in 2002. (Photo: FOX)

He added: “Thank you for the laughter, merciless teasing, strength, vulnerability, love and friendship you showed me during our time together in the spotlight.”

A handful of other notable former “Idol” contestants have died in years past: Michael Johns, a Season 7 fan favorite and Australian heartthrob who finished eighth, died in 2014 at 35 after suffering a blood clot in his ankle; an autopsy found he had an enlarged heart. Months later, his Season 7 competitor Joanne Borgella, who made it to the top 24, died from a rare cancer at 32. In 2016, Rickey Smith, who finished eighth on Season 2, was killed in a car crash in Oklahoma City at age 36.