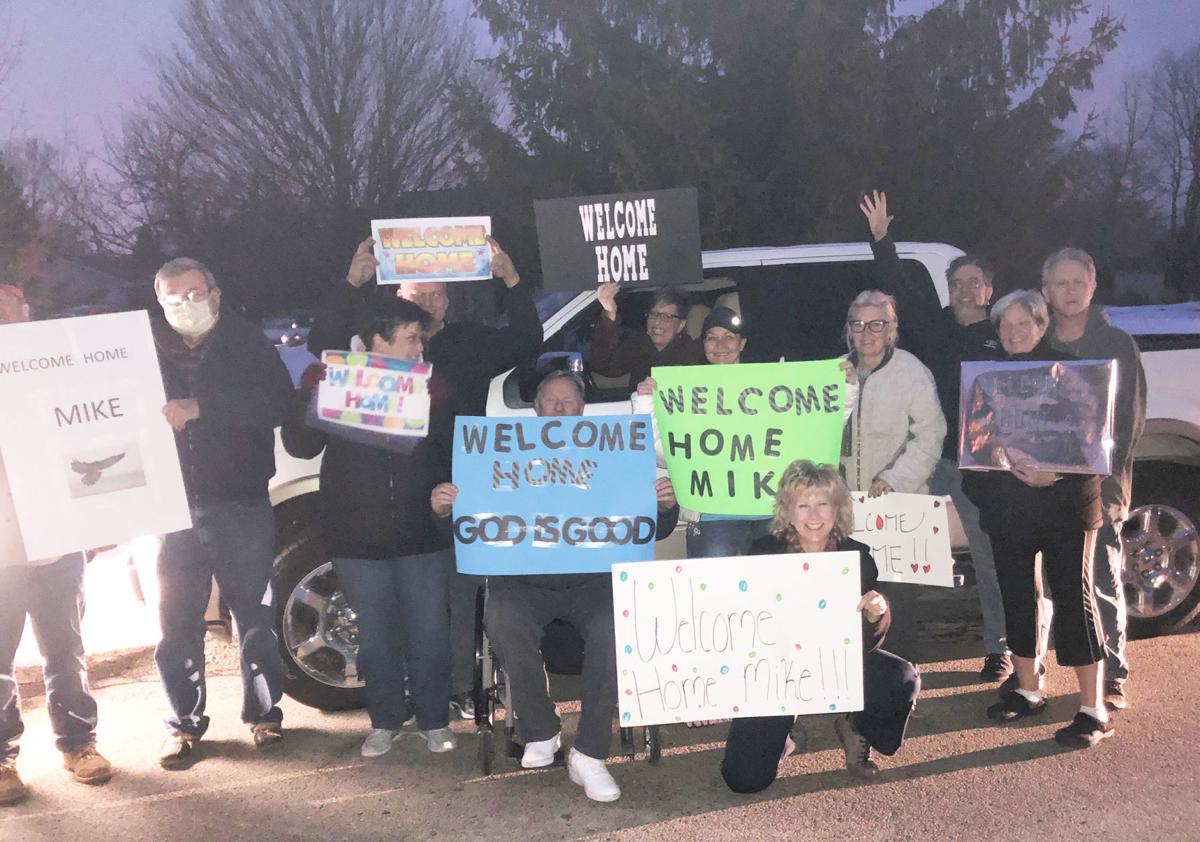 So, when the car carrying Gerber turned onto his street, friends and neighbors delivered a boisterous homecoming for the Caledonia man, who was returning after recovering from a near-fatal brain aneurysm.

The surprise celebration last Friday on Matthew Drive, complete with decorations and noisemakers, brought smiles and tears of joy to Gerber and his family.

“I’ve got friends, for sure,” Gerber said. “This made me realize how many.”

The 53-year-old construction worker almost lost everything Nov. 14 when he suffered a ruptured aneurysm while attending a religious retreat in Lansing, Iowa.

Friend Glenn Schultz found Gerber on the bathroom floor of their cabin, and he summoned help that quickly turned into an emergency ambulance ride to the Mayo Clinic two hours away.

Schultz said doctors cautioned family and friends that Gerber suffered the sort of aneurysm that most people do not survive.

“It’s quite the miracle,” Schultz said.

Although the recovery was complicated by an infection, Gerber powered through a two-month ordeal that included surgery, complications, therapy and, finally, coming home.

Because the COVID-19 pandemic made it nearly impossible for anyone to visit him in the hospital, friends and neighbors decided to give Gerber an extra special welcome home last Friday.

Dozens of people lined the street outside his Matthew Drive home, honking horns, flashing lights and waving signs as he arrived after the 5-hour drive from the clinic in Rochester, Minn.

His wife, Dita Gerber, who was riding in the car with him, said the homecoming was just what the doctor ordered.

“You feel the love and support,” she said. “It put a big smile on my face.”

Among those participating were friends and associates from the Gerber family’s church, Grace Church in Caledonia; from Mike Gerber’s employer, construction company Sid Grinker Co.; and from the neighborhood surrounding Matthew Drive.

Throughout Gerber’s hospital stay, friends and neighbors rallied around the family with financial support, encouraging words and prayer among his fellow Baptist parishioners at Grace Church.

Melanie Gerber, the couple’s 16-year-old daughter, said she appreciated hearing so much encouragement and support, some of it from people she did not even realize were her friends.

“It was really amazing,” Melanie said.

Schultz, a parishioner who helped to organize the homecoming, said he credits religious faith, as much as anything, with delivering his friend from the brink of death. Schultz said hundreds of people were praying for Gerber to survive.

“That has been the big difference,” he said. “It’s just amazing that he’s still with us.”

Gerber said he, too, did a lot of praying throughout his two-month stay in the hospital

But even though the odds were against him, Gerber said he felt at peace.

“I was never afraid,” he said. “I knew that God had a plan. I knew I was going to get through this somehow.”